Kasper Lage was involved in a general discussion regarding a new Danish National Genome Center, featured on the front page of the well-respected Danish newspaper ‘Weekendavisen’, in two articles in Ingenioren and in an interview on Danish National Radio. Kasper was also featured in Nature Methods, in a profile titled “Scoring Genes in Light of Their ‘Friends’, a Naval Approach to Science”. 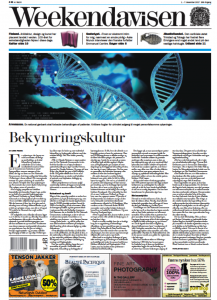